Sugar Overload at Donna and Zumbo's!

2 weekends ago, we decided to pop a visit to Donna Hay's General store, and check out Adriano Zumbo's Chocolate Cafe & Patiserrie. Oh, as well as popping by at Long Grain in Surry Hills. Unfortunately for us, Long Grain do not open for lunch during the whole month of January, and they would only resume lunch business as usual from February onwards. So no lunch.

We had fast food for lunch instead, because we wanted to save our stomachs for dessert !

We weren't allowed to take photos in Donna's shop, so I guess you just have to pop by yourself. It is located in the housing area in Woollahra, never been there before, but we were just going there just to check out her store.


Overall, things there was a little on the pricey side, just because she has her name on the items, some of the quality, was a little under, or maybe it was just my expectations.

Nonetheless, I still like Donna, and they had some vanilla and chocolate cupcakes, brownies that you can buy. So I decided that I must try Donna's to see what's so good about it and all.

Sadly, I find that the cupcake was so-so. It was pretty dense and not much aroma to it except that it was a little too sweet for my liking as it had quite a fair bit of icing. The icing was pretty grainy as well, I've tasted other icing before, and they were smooth and did not give that grainy texture. Tasted much better cupcakes before :) Like my favourite at Cupcake Bakery; Red Velvet :) Yummm 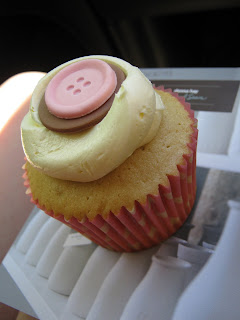 Chomp chomp away with the cupcake.

Here's just a shot of Balmain, not a very good shot, but here it is anyway. 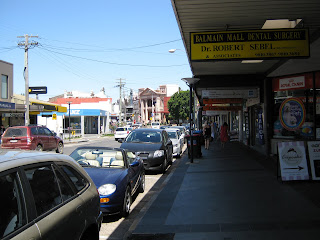 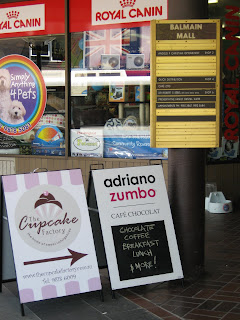 There you go.. That's Zumbo's shop, no he wasn't there. And yes it is just a corner shop, so small, nothing fancy at all.

He has 2 shops, one is a cafe the other just a patisserie. As some of his goodies were sold only in either store and not in the other, we decided to check out his Patisserie first before settling down to take a sit at his cafe.

Zumbo's patisserie was just a few shoplots away.. 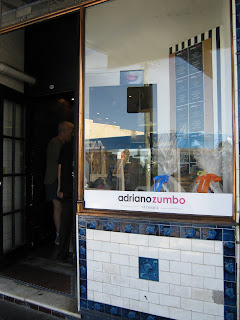 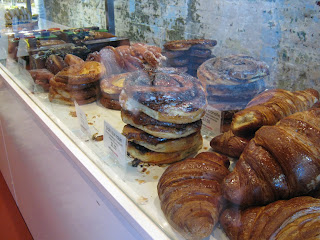 Sorry couldn't take more photos in his store..he has a bunch of colourful Macaroons! hehehe
And other pastry desserts that looked yummy but when you read its description, it sounded a lil' too complicated.

We decided not to buy any from here, and just order from the cafe instead.

So while we were in the Patisserrie, W asked me whether one of the customers was this lady from Masterchef..and I was like..wait a minute, let me check..

ahhh....yes it was I told him..then I told W* that I wanted a pic with her :) :) so he helped to ask for me. Here's a picture of us :) bumping in Zumbo's patisserie, who was also one of the celebrity Masterchef :) 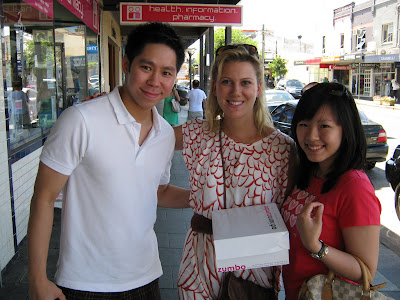 Yes, that's right, she's Justine from Masterchef, I really love her work, and thought that she deserved to be one of the finalist..but nah, she was out of the game..

Anyway, back to Zumbo, we ordered some "OMG, soooooo sweeeeeeeeeeeeeeeet the dessert and a cold drink as it was a HOT day! 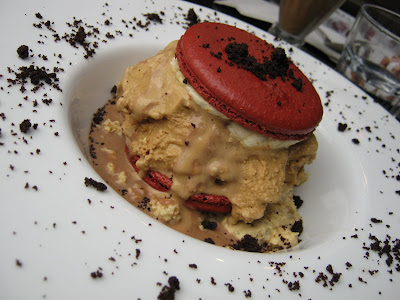 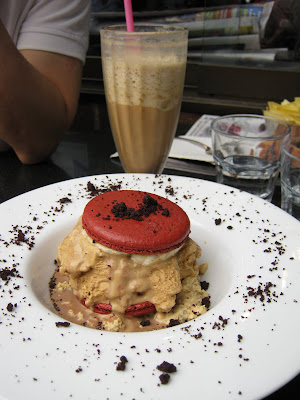 We ordered some Macaroons with Banana, rice pudding and chocolate biscuit crumbles all over the plate..it was called, It's a "MACAROON not a HAMBURGER!"
The dessert was overly sweet and rich for the both of us, we tried our best to finish it, but it was crazy...

And the Iced Mocha was HORRIBLE! No aroma to the mocha at all, it tasted like a bitter with ice drink..disappointed. which made it worst.

Overall, I would want to come back and try his other goodies from the Patisserie instead. There was no sight of his famous Croquembouche..

Had a great time anyway, but it was definitely a day of Sugar Overload!

I am lucky enough that i went to Donna shop twice and they let me take photo for both...maybe they think that too many people take photos?

About Zumbo, my friend had the iced chocolate and it was horrible aswell..haha. Oh, if u try his goodies, I like his berry brioche and passionfruit tart, the best !

:) That's good. Yea I think too many people have been taking photos already.

Yea, I know, it was pretty horrible. taste like coloured ice water to me tho :)
Yum :) tarts!

will definitely go there to check out their desserts though