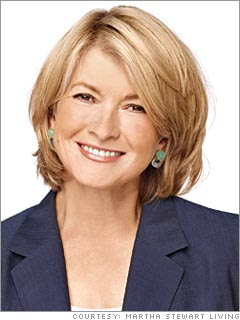 I've got some news to all Martha Stewart fans, If you have not read it in the papers yet.

Martha Stewart is visiting Malaysia from May 19 for a week!!

I hope that she has like a short baking class, but I doubt it. Based on the article, she'll be visiting some Malaysian hawker food :) Yum.

Anyway, I have taken this article from NST online, so that you can read it here. Enjoy reading.

Martha Stewart to visit Malaysia from May 19

NEW YORK: Talk-show celebrity Martha Stewart will be among a high-profile group from the United States visiting Malaysia for about a week from May 19, according to a Tourism Malaysia official here.

"We have prepared an elaborate programme for Martha Stewart and the group accompanying her," said Salahuddin Mohd Ariffin, vice president of Tourism Malaysia in New York.

With her celebrity status, Stewart is expected to be an instant hit with her Malaysian audience and generate considerable international publicity for Malaysia as a tourist destination. She is more than an author, entertainer or television personality as over the years the businesswoman has evolved into an American icon.

Stewart has turned herself into one of the world’s strongest brand names and heads a US$200 million empire that rests on ideas of domesticity, style and elegance. Her group includes her two associates, Memrie Mosler Lewis, a landscape architect, and Sophie Martha Herbert. Others will be Zakary C. Pelaccio, a celebrity chef and owner of the Fatty Crab in New York City. Pelaccio spent some time in Malaysia where he learnt the ropes of Malaysian cuisine.

He returned to New York and started his Fatty Crab restaurant, which also serves Malaysian food. The group will be led by Datin Amy Hamidon, the wife of Malaysia’s permanent representative to the United Nations in New York, Datuk Hamidon Ali. Amy, who is also the president of the Women’s International Forum and passionately promotes Malaysia’s cuisine and culture, is credited with persuading Stewart to visit Malaysia.

Tourism Malaysia backed Amy’s initiative and made all the arrangements for the visit, preparing an extensive programme for the visitors so that "they derive the maximum comfort, enjoy the multifaceted culture and cuisines of Malaysia" as Salahuddin put it.  One of the highlights of the group’s programme is the Colours of Malaysia event which Stewart and the visitors will attend.

The event, featuring a colourful parade, includes spectacular sounds and sights of Malaysia, which many foreigners describe as a "feast for the eyes and ears”.  Malaysia’s tourism minister Datuk Seri Dr Ng Yen Yen has invited Stewart as her special guest. Salahuddin said the group would visit Kuala Lumpur, Melaka and Kota Kinabalu. In Kuala Lumpur, the group will witness the intricacies of songket weaving at the Tuanku Nur Zahirah Foundation.

Stewart will also have an audience with the Raja Permaisuri Agong, Tuanku Nur Zahirah. Stewart, who has a very popular talk show on food, as well as the other guests will be treated to a "hawkers’ dinner" at Kampong Baru to give them a better insight into local Malaysian fare.
Many American tourists who have visited Malaysia find the exotic array of fruits and vegetables in Malaysia fascinating –- be it the mangosteen, rambutan, starfruit or even the pungent durian. Stewart has also been invited by Zulkifli Razali, executive chef of Bijan Restaurant at Jalan Bukit Ceylon in Kuala Lumpur to a cooking demonstration.
Tourism Malaysia is also organising an exclusive visit to the Petronas Twin Towers.

A day trip to Melaka has been planned to visit various landmarks of the city, which has strong Dutch, Portuguese, Chinese and Indian influences evident in daily life as well as the state''s rich culinary heritage. The Sabah part of the programme is being organised by the Sabah Tourism Board. The group will visit the House of Skulls at Mansopiad Cultural Village, Marine Eco Research Centre at Gayana Eco Resort and the Sepilok Orang Utan Sanctuary in Sandakan.

Salahuddin said the rationale for organising visits by such high-profile visitors was to show them the "real Malaysia" in the "spirit of 1Malaysia" so that when they returned home, they could relay their positive impressions to others. These celebrities, who have large fan followings, also became effective spokespersons for Malaysia, he said.