One of my readers wanted to know about Oreo's Cheesecake :)

So here's the recipe of the Baked Oreo cheesecake, I cannot remember where I took it from. I had to make some changes a little to the recipe.

Also, it says to sprinkle the rest of the chopped oreos on top after it is baked, I did this before I put it in the over, there are many ways you can do, because I love Oreos, I choose to have it IN and on TOP of the cake. It may look a little too brown, but it is still moist and yummy.
On the other note, I also tried making a NON-BAKED Oreo's Cheesecake, I prefer the baked one better, I think it is just the texture. That rich cream cheese that you taste when you bite. That's just me, but if you're also interested to know how to make the NON-Baked Oreo's Cheesecake, let me know. Though, I had to put it in the fridge longer, as the texture was better. I actually removed the side ring of the tin before it was 100% chilled, because I was too excited and just wanted to have a taste of it. No harm done, it just doesn't look as nice :) 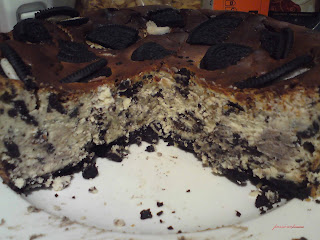 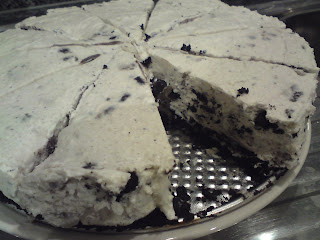 1. Grease the bottom and sides of the 20cm baking tin well with a little butter or spray with spray and cook.
2. Mix melted butter with crushed oreos only without cream for base
3. Press into the bottom of the cake tin and set aside.
4. In a large mixing bowl add the cream cheese and sugar, beat until creamy and well combined.
5. Add all of the eggs, pinch of salt, sour cream and the vanilla essence, beat well.
6. Add the coarsely chopped oreos and fold them into the mixture.
7. Pour the mixture into the baking tin and bake at 170 C for 50-1.10hrs or until firm to the touch.
8. Check on it after half and hour and if you see the top going too brown cover with tin foil.
9. Remove from oven and allow to cool completely, then put in the fridge to cool for 2 hours or overnight in the pan
10. Remove from the tin by sliding a knife around the edge before removing the sides. Sprinkle the rest of the chopped oreos over the top on their own, or add a little whipped cream.
Posted by Passionate Mae at Thursday, November 12, 2009