Yay, I received the thumbs up for my Nutella Cake :)


Dear brought it to work for his colleagues since it was his birthday, and I brought some to the office too.


The Nutella Cake was moist and not dry at all.


The dark chocolate complemented the sweetness of the Nutella which balanced the taste :)


Oh, it is a flourless cake too, just made from yummy chocolatey ingredients.


This recipe was adapted from Nigella Lawson.


I baked my cake longer than what the recipe stated, because I find that it was still watery, and wanted to make sure that it bakes properly. It was my darling's birthday, and I guess the pressure was on, because I really wanted to make it perfect :) What more, I've got to choose a cake that I've not done before..hehe..It's okay, he likes his Nutella, that's why :)


Enough of talking, I present to you my Nutella cake. 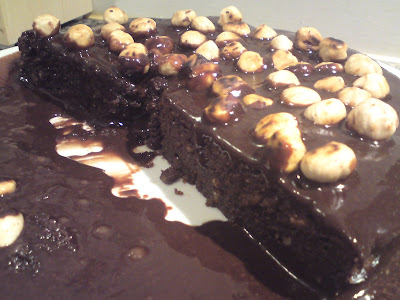 Look at the inside, all moist and chocolatey (I know, so much chocolate sauce :) )

Try this recipe, it is a lot of work, but if you're a Nutella fan, or a Chocolate fan, this is worth making :)

I've been trying to paste the recipe in here, but it keeps shutting down my browser.

I'll post it some other time or you could just google Nutella Cake recipe.

On another note, I feel like baking again tonight, as much as I'm so so extremely tired. Just thinking, what should I bake? Perhaps another cake? I bought Tim Tams, maybe a Tim Tam's cheesecake?

We shall see, update you on it later.