The sound of Chocolicious is making the side of my cheeks tingle with the thought of all the sugary yum yums in my motuh..

So, I made some chocolate lava cake yesterday in ramekins..it was sooo chocolatey..the amount of chocolate that was used…it was just like a block of chocolate…anyway…as much as it sounds oh so chocolate-y…. my 1st attempt in making it..Failed :( the bottom part was still a lil too runny instead of a cake-like texture…but the middle part was all glooeey and runny which is the right texture for a chocolate lava cake. 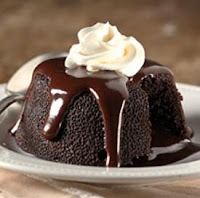 The chocolate was really rich and it was at the right sweetness…hmm..must be something i did wrong along the way…maybe the temperature was too hot..but i will definitely try it again…

The recipe looks easy to make..but i guess you’ve got to have the skills to make it??

It’s okay, it is only my 1st attempt at it, no hearts broken yet and I am still on a look out for other chocolate lava cake recipes to give it another shot! :)

I will try until i manage to make it look like the 2 pictures above..nyumm ;)
Posted by Passionate Mae at Friday, October 30, 2009